Thank you for all the patterns you crank out every month, my wardrobe would look at lot more boring without you!

Usually your patterns fit rather well, but there are exceptions. Such as the Wrap Dress 07/2016 #102, it looks simple, fits the model well. Glam it up with heels or wear it casual with flip-flops, the seemingly ideal summer holiday dress.

Hm… the cleavage is a bit open, but since I’m less busty than the model it should be fine…

And so I started sewing the dress in a lovely viscose fabric. But OMG that decolleté was loooooooow. Indecently so.

I first tried shortening the straps to the max, so as to raise the bustier part maximally. I’m almost up in the armpit yet you still see a lot of bra…

Did I make a mistake???? Apparently not. A quick search online and the ladies who made this dress had the exact same problem. They either just wear it as a ‘cover-up’ on the beach and show some boob and/or bikini, one clever lady even inserted an extra piece of fabric. Shame though. And shame on you Burda, a simple prototype or two would have revealed the busted busty issue. I wonder how many times a pattern gets tested in a company like yours? 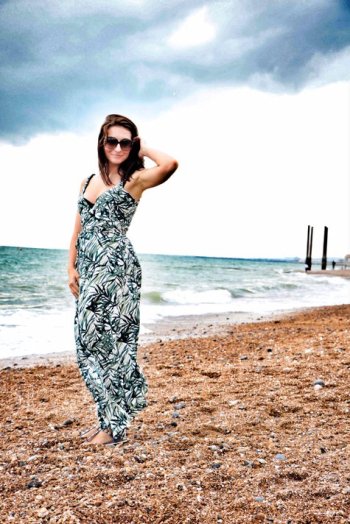 great dress/photo/model but the bust part of the dress is obviously much too small / low / to the sides.

inserting a bit of lace to keep one’s dignity.

Dear Burda, I think you realised your mistake at the photoshoot, and tried covering it up with the model’s tresses, as all her hair was combed to the front and over her cleavage.

So I re-drafted the bustier adding 3cm to the offending part. New parts + lining made.

It’s now decent enough, but the excess 3cm have to be tucked in elsewhere, see bottom pinned fold. Also the top edge starts to curl now 😦 despite stitching inside and top stitching. (In retrospect my adding of fabric was poorly conceptualised for such a fluid fabric, that’s why I buy good quality patterns rather than draft my own, duh)

So I unpicked the inside + top stitching and ironed some vlieseline to avoid that curl. I also took it in a further 2cm by the strap to pull it upwards.

It’s now ‘wearable’, and looks OK from far. But I won’t wear it, the front part is still too wonky and gaping. If someone talks to me, this is what they see:

Should you still be interested in making  this lovely dress, there’s a Burda Style Extra magazine out now (summer 2019) where for 6,95€ you get this pattern but also 15 other patterns. In Dutch it’s called “the Best of zomerjurken”. I’ve seen it in French as well “Best of Robes” 🙂

If I find the courage I’ll remove the top again, and try draping something myself.

It’s just not funny when a sewing projects takes an extra 15 odd hours unpicking and trying to fix someone else’s mistake. I will try to research patterns better before starting, and I will try to post my work more often, model photos or technical drawings really don’t say that much, but bloggers do. Thank you all out there!